Home » Dysons Corrale is a $500 straightening iron with flexing plates

As someone who straightens their hair pretty much every day, I have plenty of frustrations with today’s options. My hair is coarse, puffy and I have a ton of it. To get a sleek look, I have to set my iron as high as 437 degrees and go over sections of my hair about four to five times. The damage I am doing to my precious tresses over time keeps me up at night, and as much as I’d like to embrace my natural ‘do, sometimes it’s just not practical.

According to Dyson’s global ambassador Jon Reyman, there are several ways in which your hair can be damaged: UV rays from sun exposure, chemicals like dyes and relaxers, heat from implements and hairdryers as well as mechanical acts of brushing or gripping. With repeated use of a straightener, your hair is subject to repeated heat and mechanical damage, which can compromise it over time.

“We discovered some interesting things which help us adjust the heat so we can go 20 to 40 degrees lower with 50% less damage, and get the same exact look,” Reyman told Engadget. I was intrigued — this means I might be able to get the same control over my hair at about 410 degrees instead of 440.

The key component that makes the Corrale stand out is its plates. On a regular straightening iron, because you’re controlling the device from one end, you aren’t able to apply the same pressure evenly across the head. That means the strands that are close to your hand are gripped more tightly, while those furthest away tend to fall out. Or, if you want to keep them in the iron’s clasp, you’ll have to clench your fist tightly. 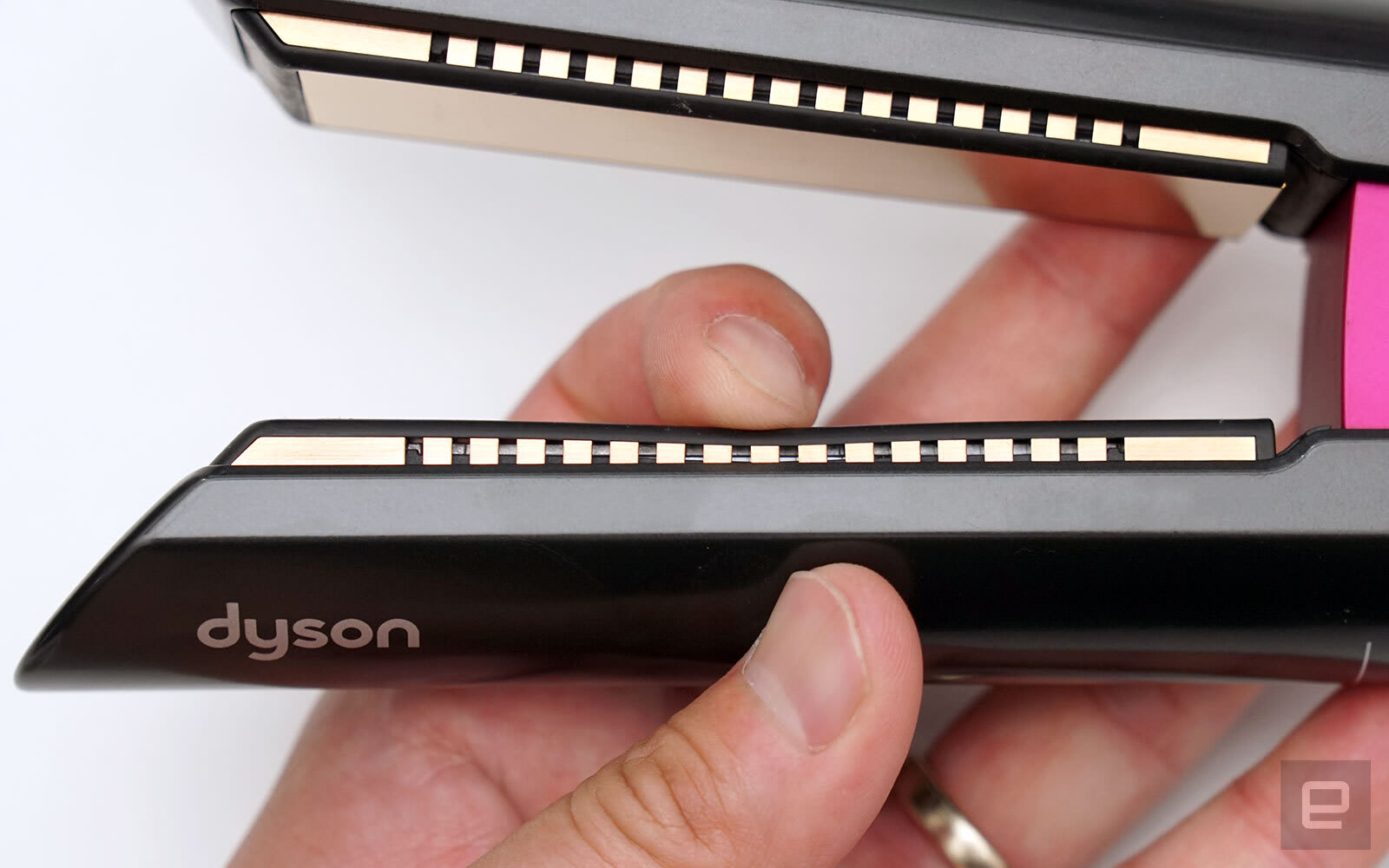 With the new flexing plates, the Corrale applies the same amount of pressure to all your hair with a normal grip. As the company’s founder Sir James Dyson told Engadget, “Every 2 or 3mm there’s a slice across the plate that allows them to flex.” Each plate is extremely thin, too, at just 65 microns — about the width of a strand of human hair. This lets the manganese-copper alloy plates flex without breaking, according to Dyson.

Because the Corrale is more consistent during each pass, you won’t have re-do setions of your hair to achieve the same sleekness as you would with a typical straightener. That reduces the mechanical damage you’re exposing your tresses to and also helps with heat for a couple of reasons. First, you’re not dragging the iron over your hair as much. Secondly, because of the more-even grip, the theory is you can get a sleeker finish with a lower temperature. In fact, the Corrale only operates at three heat levels: 330 degrees, 365 degrees and 410 degrees Fahrenheit.

I was skeptical that the Corrale would be able to achieve the hold my hair needs with a max temperature of 410 degrees. Reyman said he felt the same, until he used the final product. At our demo, Reyman used the Corrale on a model with what he described as “4B” hair type — referring to the amount and tightness of curls. He pulled out a section of her hair and ran the Corrale through. Her hair went from coiled and kinky to straight and sleek with one pass of the device set to 410 degrees. I was impressed, though to see how this compares to other straighteners I’d need to use it on my own hair, which was already straightened before I got to our briefing. 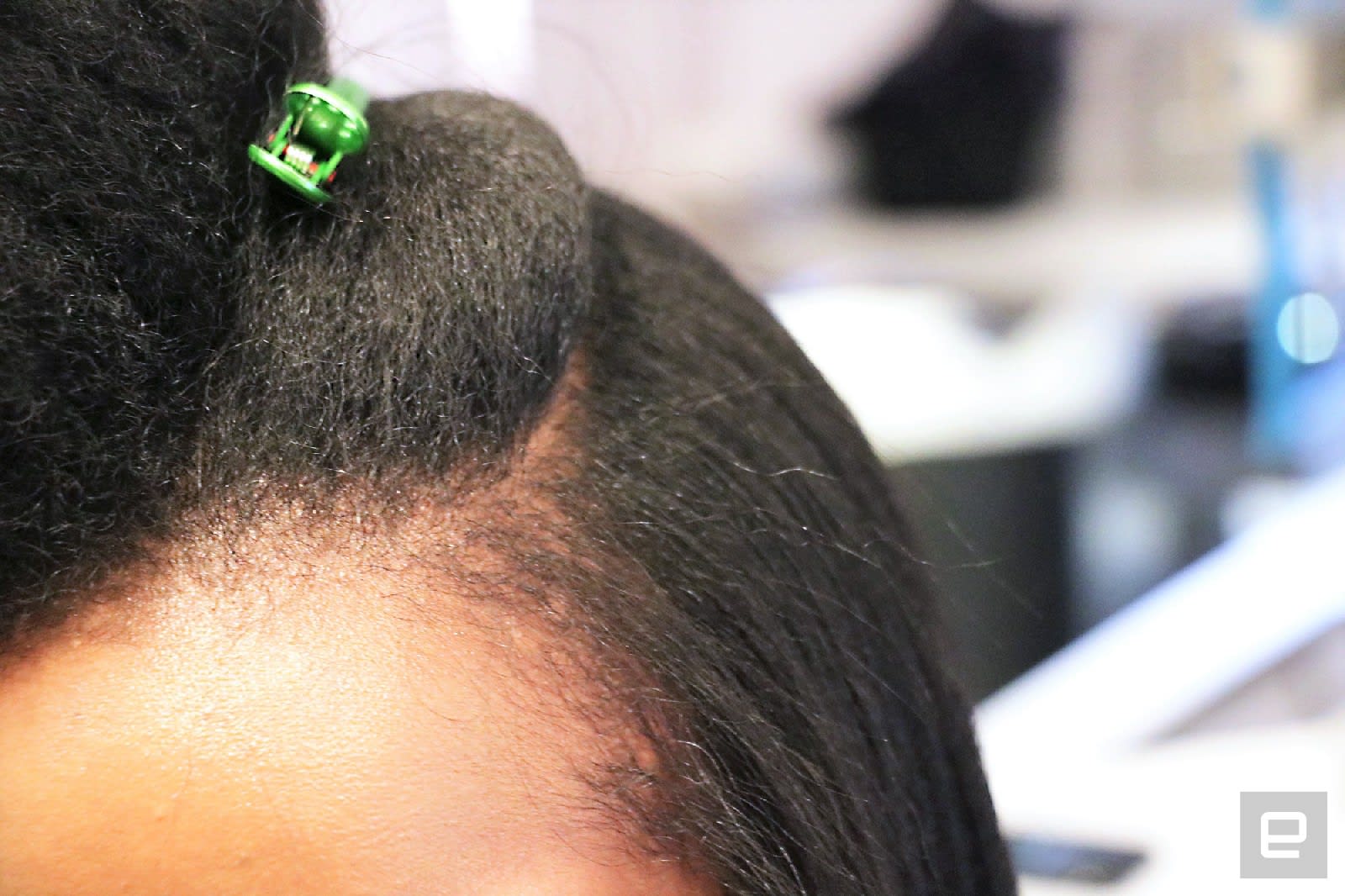 I did try the Corrale on some samples of dummy hair, and its grip was indeed more even and firm than the irons I’m used to. But the Dyson device is also heavier, in part because of the four-cell lithium battery it packs. You can use this as a cordless straightener, which means you can technically iron your hair in a cab, for example. The Corrale even comes with what the company calls “flight mode.” It’s a thumb-sized tab with four pins that you unplug from the middle of the device to prevent it from accidentally turning on.

Reyman said the Corrale can last up to 60 minutes on a lower heat setting and 30 to 40 minutes at max. You can also use the device corded when it’s out of juice, and it will fully recharge in 70 minutes with the accompanying charging cradle and rotating magnetic cable.

Part of that power goes towards the onboard microprocessor that keeps an eye on the Corrale’s temperature via a platinum sensor. Dyson claims it makes sure that the plates never get too hot, measuring the temperature 100 times a second to keep it at the setting you’ve picked. The Supersonic and Airwrap have similar heat management systems, too.

You can get the Corrale starting today for $500, which frankly is a lot. For comparison, you could get a straightening iron of a similar size from Amika for about $100, while a Conair at a drugstore can cost as little as $30. This pricing is pretty typical of a Dyson though — the Supersonic hairdryer rings in at $399, about 20 times the price of a lower-end drugstore alternative.

Still, the company sold a ton of those, and the device has a 4.5-star rating based on 16,649 reviews, so people seem to love it. If you really want the Corrale and don’t want to cough up $500 upfront, you could also opt for an installment plan. For the few people who use a hair straightener as much as I do, the Corrale could be worth the investment. The rest of the world could probably live with something cheaper.

Richard Lai contributed to this report.